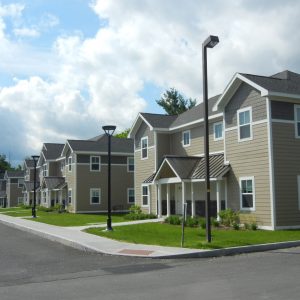 Le Moyne College faced a housing shortage in the spring of 2014 due to ongoing construction projects and a growing enrollment for the fall 2014 semester. Holmes▪King▪Kallquist was engaged in February 2014 to design housing for 24 students for fall occupancy. Construction began May 1st and the project was ready for occupancy on August 15th. This was accomplished by the use of modular construction. Three buildings were designed containing two, four, and two 3-bedroom townhouses, respectively. Each contains living area, dining, kitchen, three bedrooms, and one and one-half baths. The modular units were built in a Pennsylvania factory, while foundations and site work were being completed, and then assembled and finished for occupancy.